GETAWAY Festival – let’s meet the stars of the Polish outdoors

GETAWAY Festival is fast approaching. 3 days of outdoor, sports and travel adventure await you on May 17 – 19, 2019 at the Lecture Center of the Poznan University of Technology. The Festival’s program includes inspiring meetings with Polish outdoor stars, outdoor film screenings, theoretical and practical workshops, outdoor activities and plenty of attractions. 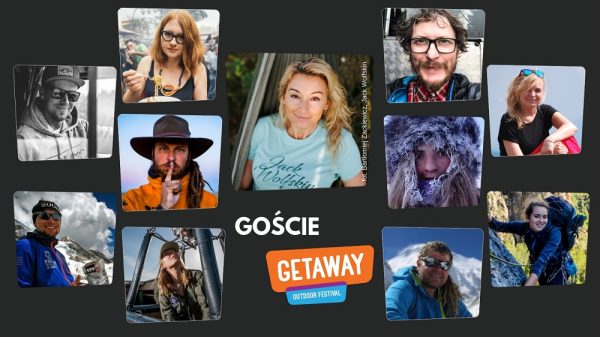 GETAWAY Festival is a meeting of outdoor people, lovers of outdoor activities, sports and travel enthusiasts. During the event, you will be able to meet more than a dozen extraordinary Stars who will talk about their passions, fulfilled dreams, realized expeditions and plans for the future. We hope their stories will inspire you to start your own outdoor adventure. Here are the Guests who will perform on the festival stage:

Known to a wider audience from the “Woman on the Edge of the World” travel program, which she has been doing for 10 years now. A traveler in flesh and blood, a lover of automobiles, a writer, director and a fulfilled mother. Winner of the Golden Telekamera in the Television Personality category, Winner of the Golden Nymph Award for the documentary “Ghost People” at the Monte Carlo Festival. Currently Program Director of the Travel Channel, and previously Editor-in-Chief of “National Geographic” and “NG Traveler”. Martyna with her achievements proves that the impossible does not exist. She is the first woman from Central and Eastern Europe to complete the world’s toughest Dakar Rally. She has conquered the highest peaks of 7 continents pursuing her Crown of the Earth project. During the GETAWAY Festival (May 18 to be exact) we will celebrate with Martina her 13th anniversary of climbing the world’s highest mountain – Mount Everest. Get ready for a big dose of inspiration.

Traveler – a professional who toils in sophisticated, original and at the same time extreme expeditions. He has to his credit a bicycle traverse of the longest mountain range in the world – the Andes, a solo bicycle ride along the Canning Stock Route in Australia – the most difficult road mapped on Earth, a solo pedestrian traverse of the Salar de Uyuni in Bolivia – the largest salt desert in the world. Last year he made history as the first man to walk alone and without outside support through the Mongolian part of the Gobi desert. Honored at Colossi 2019 in the “Stunt of the Year” category and nominated in the 13. of the Travelery contest also in the “Stunt of the Year” category. It couldn’t be more different – on GETAWAY you will hear about the expedition through the Gobi. Matthew will talk about “Silence. In a journey between words”, and you will run out of words from the impression.

Introducing a traveler, journalist and photographer with endless reserves of courage, energy, strength and sensitivity. Adventure expeditions are her middle name. Her greatest affection is for bears, which she likes to look deeply into the eyes if she meets them. He has been sitting in the outdoors for a nice couple of years realizing demanding, often solitary expeditions to the North. Crossed the Yukon River by bicycle in winter, walked the Pacific Crest Trail alone, and searched for an unusual species of bear in British Columbia on a solo canoe expedition. It was for the “White on Black” project that Kamila received the Kolos 2019 in the “Travel” category and the “Audience Award” for the best presentation. She is also nominated in the “Trip of the Year” category in 13. edition of the Travelery competition. Her lecture is a must attend. You simply have to be there.

Traveler, photographer and dreamer. Organizer of numerous travel and photography projects, which included trips to Mongolia, India and even Spitsbergen. He publishes his work and accounts of his journeys in the Polish and foreign press. He received m.In. Travelers 2018 award in the “Trip of the Year” category and Kolos 2019 in the “feat of the year” category for her Wheelchairtrip expedition. Two Americas, two guys in wheelchairs, one off-road vehicle, 371 days on the road from the Land of Fire to Alaska and one goal to prove that it is possible to overcome the hardship of the journey and the adversity of the road being a disabled person. How strong the passion for travel can be, the belief in one’s dreams, the desire to discover the world and oneself? You will find out by moving the horizon together with Michal.

A man of many passions travels, climbs, explores caves, but is mainly known as one of the best ultra runners in Poland. Has repeatedly tasted the taste of victory during the Polish Championships, the Polish Cup in orienteering events or the Butcher’s Run. For the past 3 years she has stood on the top step of the podium of international extreme ultra runs around the world m.in. Baikal Ice Marathon, International Elbrus Race, Ultra Fiord Patagonia, Mount Everest Marathon or Moab Endurance Run. What it’s like to be addicted to exertion, to have a strong head, to cope with extreme exertion, and finally to win? The answer is the Hercog Mountain Challenge. I wonder if you will be able to sit in your seats at the meeting with Peter.

She is a woman of high spirits, a member of the Poznań Aero Club. Since 2006 she has been competing in Polish and foreign ballooning competitions, achieving many successes. She is the current European Women’s Balloon Champion. He has also won the Women’s Balloon World Cup to his credit. Beata in Poznan will give you a behind-the-scenes look at the life and work of a balloon pilot in India. It’s going to be a doozy.

Surfer, surfing instructor and talented photographer on special assignments. Author Baltic Surf Scapes. The list of places visited with a surfboard and a camera is truly impressive: from Mexico to Morocco, Portugal, France, the Netherlands, Denmark and Iceland. His works have been awarded at prestigious international photo contests. Krzysiek knows best what it is like to experience a real storm both at sea and in life. Fought a victorious battle with cancer. Today he continues to pursue his passions, thanks to tremendous strength, determination and motivation. Lately he has been enjoying the icy waters of the north. As befits a surfer during the meeting a wave of stories guaranteed.

Known to Poznań residents as the owners of the famous cafes and restaurants Cafe La Ruina and Raj. Lovers of traveling, explorers of interesting and new flavors, authors of travel and culinary books that publish on their own. During their recent trip, they spent 340 days with two young children aboard a colorful car (on Poznań plates), covering 80,000. km across two Americas. They are nominated in 13. edition of the Travelery competition in the “Travel of the Year” category. Monika and Janek will show you what family travel and America look like from behind the scenes (literally and figuratively).

In front of you is a woman cave explorer, a member of the Wielkopolska Cave Mountaineering Club. Champion of Poland in Cave Techniques will explore the secrets of an exploration expedition exploring caves in the Prokletije mountains in Montenegro. Headlamps may come in handy for you, because during the meeting with Sonia you will look “Under the Lining of the Cursed Mountains”.

A mountain guide, he spends a lot of time in the Himalayas of Nepal organizing expeditions and treks there. He can boast of traversing the world on horseback, camels, elephants, bicycles and his own feet – this means of transportation suits him best. On foot beat the m.in. Carpathian Arc from Romania to Bratislava – 2500 km and the stretch from Yakutsk to Kolkata in India – 8000 km following in the footsteps of the great escape from the Soviet gulag Witold Golinski Long Walk Expedition. Recently, as part of the “Great Himalayan Trail 2015-2019” program, together with Joanna Lipowczan, he traversed 2500 km traversing the Himalayas of Nepal, India and Kashmir. Bartek will talk about the two stages of this expedition and plans for the final 3rd stage on the festival stage.

A traveler who combines two worlds – underwater and mountainous. She inspires with her story, daring dreams and shattering stereotypes. Since childhood, she has struggled with spinal muscular atrophy, but this does not prevent her from overcoming further challenges. Conqueror of Kilimanjaro, Gerlach, Rysy and Monk – she did it as the first person with such a disability. She is sure to infect you with positive energy, courage to act, motivation and a wide smile.

Come to the GETAWAY Festival, meet these amazing people and their extraordinary stories. Get inspired by the outdoors and adventure.