Skip to content
HomeBlogThe Endurance, Shackleton’s ship sunk more than 100 years ago in Antarctica, has been found – Outdoor Mag

The Endurance, Shackleton’s ship sunk more than 100 years ago in Antarctica, has been found

Endurance, the ship of one of the greatest explorers of all time, Sir Ernest Shackleton’s, sank in 1915 in the Weddell Sea. Last weekend, a group of marine archaeologists discovered a 107-year-old wreck!

Next to the Titanic, the Endurance is probably one of the most famous wrecks in history. This is a relic of the era of heroic Antarctic exploration, when the risks accompanying exploration expeditions to the continent were disproportionately greater than today. Not to mention the fame, in the end it was a race for the South Pole. The first to reach it was Roald Amundsen (December 14, 1911), the second was Robert Falcon Scott (January 17-18, 1912), who unfortunately paid for his success with his life.

Ernest Shackleton’s goal, on the other hand, was to traverse Antarctica, from the Weddell Sea to the Ross Sea. The expedition set out at the end of 1914. However, the plan broke down early in the voyage, when after six weeks, 160 km from the Antarctic mainland, the ship was stopped by a floe. On Feb. 14, 1915, the ice congealed the water and the fight for survival began – one of the most famous in the history of exploration. 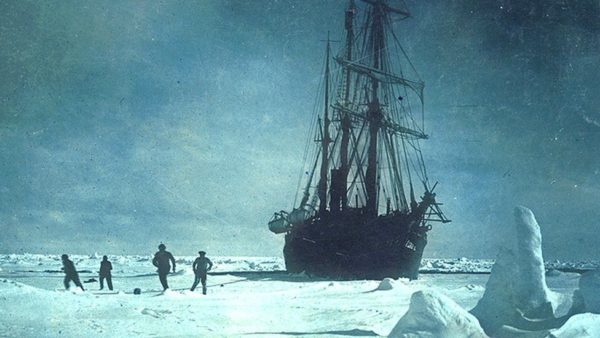 After eight months of living on an immobilized ship due to progressive hull damage, the crew had to disembark and camp on the ice. On October 27, 1915, the Endurance was crushed and sank. 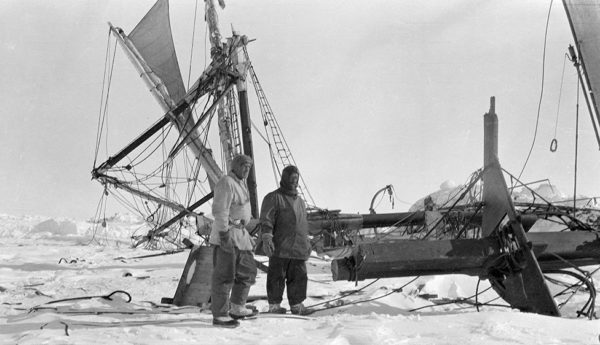 Ernest Shackleton and the sinking Endurance (photo. University of Cambridge)

After six months on the ice, with no prospect of recovery or the arrival of help, the crew led by Shackleton made a desperate attempt to escape, first pulling three lifeboats across the ice, then happily crossing to Ivory Island, where the encampment was set up. Here Shackleton selected five of his most trusted men and moved on in search of help. In a small lifeboat, he crossed the stormy sea to South Georgia, 1,200 kilometers away, off the coast of which he had to leave three members of his crew unable to continue the journey. With the other two he set off on foot through the mountain range to reach the whaling harbor of Stromness. On May 20, 1916, after a 36-hour march and with the remnants of their strength, the three reached their destination. By the end of August 1916, after struggling for more than a year and a half to survive among the Antarctic waters and ice, Shackleton had rescued all members of his crew. 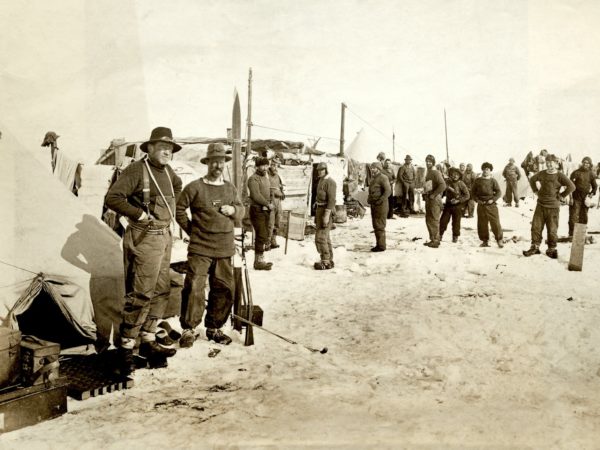 Shackleton (left, his right hand Frank Wild (foreground right) and the 28 expedition members at the ice floe encampment, where they spent six months after the ship’s sinking and before setting off in search of land (photo. Frank Hurley/Scott Polar Research Institute, University of Cambridge)

Shackleton himself described the site where the Endurance sank as the worst part, the worst sea in the world. The inaccessibility and the unique story of the crew, made the shipwreck an object of desire for modern marine archaeologists. 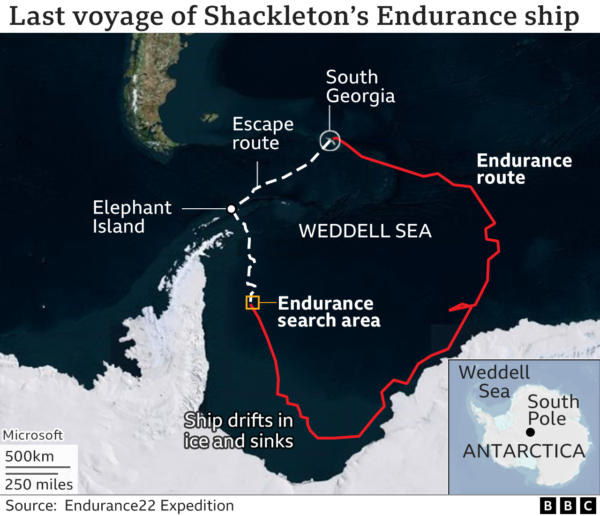 The route covered by Shackleton’s expedition and the approximate location of the Endurance’s sinking (elaborated. Endurance search expedition22)

The icebreaker Agulhas II sailed from Cape Town for the search this February. On board were the ship’s 46 crew members, 64 expedition members and two underwater drones. Locating the wreck, as well as getting to the site itself, was not easy. The icy critters of the Weddell Sea that crushed the Endurance are challenging even for modern ships. 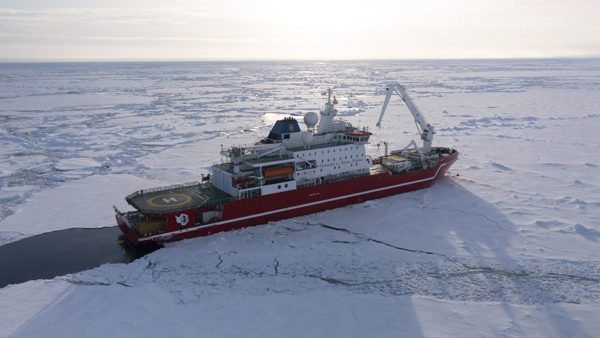 The wreck of the Endurance was found this past weekend (March 5-6, 2022) at a depth of 3008m. Here’s the underwater drone footage:

As you can see from the photos, the wreck is in excellent condition. This is due to the cold waters of the Weddell Sea and the lack of wood-feeding organisms. Instead, it is sprinkled with a whole variety of marine life, in the video we see: cheetahs, anemones, various forms of sponges, snakeheads and lilyfish (related to sea urchins and sea stars). 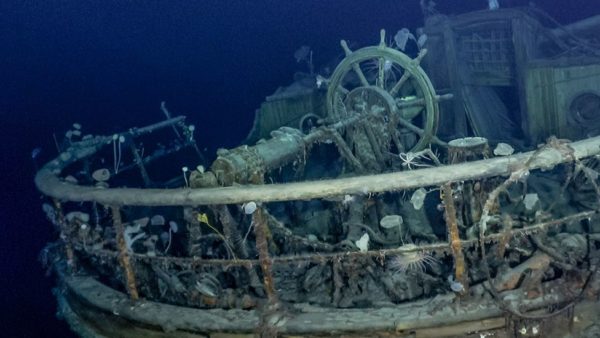 The footage also clearly shows the ship’s name on the hull – when it appeared in the frame, our jaws literally dropped – said the expedition leader Dr. John Shears. Success commented:

This is an exceptional achievement, we have accomplished what many considered impossible. This is probably the most difficult search for a wreck in history. We battled ice-covered seas, thunderstorms and temperatures as low as -18 degrees frost.

Mensun Bound, a participant in the search, fulfilled the biggest dream in his 50-year career as a marine archaeologist:

Without the slightest exaggeration: this is by far the most magnificent wooden wreck I have seen!

The wreck was discovered on the 100th anniversary of Sir Ernest Shackleton’s death (January 5, 1922).

The expedition was funded by an anonymous donor, who contributed more than $10 million to the cause. The wreck will remain intact as a historical monument, according to an international agreement signed in 1959.