Hiking in the mountains is one of the most stimulating and accessible experiences. At the very beginning, it is necessary to find one’s stride and even out one’s breathing, while the excitement calms down as one observes the unique landscapes, changing around every bend and with every step leading upward. The hike continues in silence punctuated only by the sound of the surroundings, nature, stones shifting underfoot. Behind every step, an unexpected encounter is made: with the most interesting inhabitants of this world outlined by sheets of water, ice, rocks and the blue sky overhead.

Starting the weekend following the June 20, in the mountains of Trentino and especially in the Dolomites, a UNESCO Human Heritage Site, the network of more than 5,800 kilometers of trails is coming back to life with the opening of most of the 140 alpine refuges. 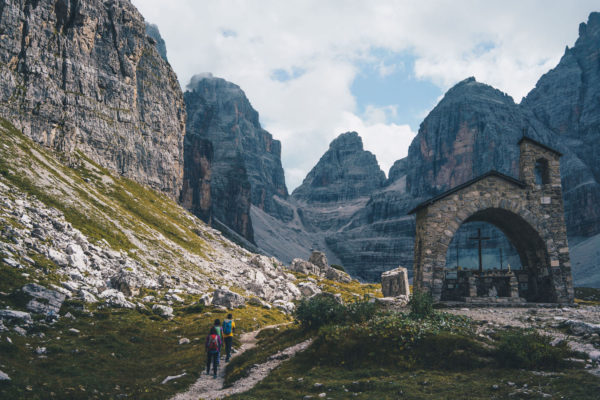 Everything about the Alpine chalet is a bit special, starting with the owners and their history. These are people filled with boundless passion, who have always lived in harmony with the mountains and the local land. They can “read” from the air, the clouds, the sky and tell you if tomorrow will be sunny or if the rain will come before noon, but also if the footwear is suitable for the trail and if the route chosen is the best one.

Certainly one of the most important pieces of news this summer, coming from high in the mountains, concerns the completion of years of restoration work and the reopening of the The “Maria e Alberto ai Brentei” refuges, Located in the heart of the Brenta Dolomites and run by alpine guide Luca Leonardi and his family.

The bathrooms have been modernized, a new kitchen has been arranged, but most importantly there is a panoramic dining room maintained in a modern style. Thanks to the large glass window, one can sit behind a table and enjoy a panoramic view of the peaks as far as Bocca di Brenta, Crozzòn di Brenta, Cima Margherita, Tosa and Fracingli while eating. Restoration work has restored the property to its true chalet atmosphere, which is a permanent fixture in Brentei, especially because of the history of the place and the people associated with it, starting with the almost legendary Bruno Detassisa. In the late 1940s. The Fossati Bellani family, the first owner of the chalet (for the family subsequently donated the facility to CAI’s Monza branch) entrusted Detassis with the task of managing the place, which he first exercised personally, from 1949 to 2000, and then, in 2008, passed on his life’s work to his son Claudio.

The Brentei hut is reached by setting off from the parking lot in Vallesinella, 4 km from Madonna di Campiglio, following the SAT trail number 317, up to the Casinei hut, and then following the “Sentiero Arnaldo Bogani” trail (marked with SAT number 318), which in total takes about 3 hours. This is the most common route leading to the hostel. 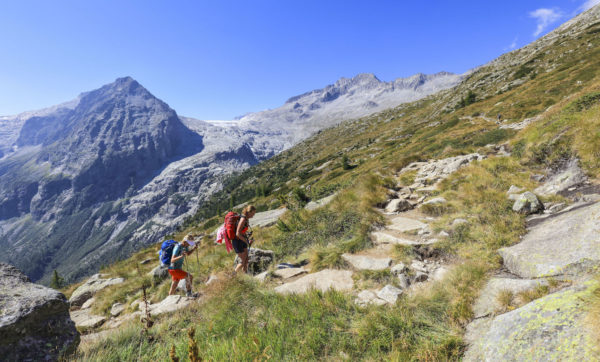 An alternative and less traveled route, on the other hand, crosses the picturesque area once admired by the first Alpine explorers of the Brenta Valley, who came here in the second half of the 19th century; it leads right through the valley. FROM THE S. Antonio di Mavignola follow the signs for Val Brenta until you reach the parking lot “Piazzale delle Bore”. From there, the route continues along the SAT Route 323, crossing the pastures of Malga Brenta Bassa, Malga Brenta Alta, finally leading to the refuge after about three and a half hours.

At the refuge with your family

There are many routes, some of which take up to several days to complete, and each offers the opportunity to experience emotions tailored for families and hikers with varying degrees of preparation and experience. We chose a few of them.

In the valley Val di Rabbi, in the Stelvio National Park, families can enjoy a route divided into two days and leading to the Dorigoni refuge in the Val Saènt valley, to then reach the lake and the Corvo refuges. The return road ends at Piazzola di Rabbi. On the first day, the three-hour trek from Malga Stablasolo to the hut (nearly 900 meters of elevation difference) is an opportunity to admire the waterfalls in the Saènt Valley. The next day is dedicated to an uphill route, with nearly five hundred meters of elevation difference, crossing the viewpoint of Cima Collecchio (2957 m), at the junction of Trentino and Alto Adige, to then lead to Lake Corvo and the nearby hut of the same name.

Also for families, this time in the Fassa Dolomites, There is a route from Val Contrin to Val San Nicolò. You set off from Alba, near the Ciampàc cable car station. After overcoming the most difficult height difference, one enters the Val Contrin valley, and already on the other side of the river one reaches the Mèlga Cianci hut, and then, after 2 hours, the historic Contrin hut. Here, the next day, after a morning of admiring the sunrise over the southern slope of the Marmolada, the next stage begins, leading towards the Passo San Nicolò refuges. Surrounded by the peaks of the Marmolada Massif, the descent into the San Nicolò valley begins, dotted with mountain huts and typical tabià.

In the Stelvio National Park, in Pejo valley, setting off from Malga Mare, you can reach, after about a two-hour march up the mountain, the Cevedale “Guido Larcher” refuge In the upper part of the Val Venezia valley, where the landscape is formed by glaciers, albeit small, and the peaks of Cevedale and Palòn de la Mare. This is an area where it’s easy to spot some alpine animal species, such as marmots, golden eagles, deer and chamois.

The next day you can take a tour of the lakes, starting from the Larcher refuge. Next we will encounter: Lake Marmotte, Lake Lungo, Lake Nero, Lake Careser. From here, return to the parking lot at Malga Mare.

Over Madonna di Campiglio it is worthwhile to follow a closed loop route, following the trails connecting the refuges on this slope of the Brenta Dolomites. From the Passo Campo Carlo Magno pass, climb on foot up to the Giorgio Graffer refuge, Below the Passo Grostè switchbacks. In June and July, you can take the opportunity to go all the way to the hut “Gli orti della Regina” (Gardens of the Queen), a true mountain botanical garden, rich in various species of alpine flowers, of course just to admire.

The second day is a road leading up and down for about 2 hours, until the F hostel.F.Tuckett, At the foot of the Vallesinella glacier. The route continues towards Val Brenta, to reach again the Maria e Alberto ai Brentei refuge, overlooking the Crozzòn di Brenta and the Cima Tosa. On the third day, we descended as far as the Casinei hut, and from there to Vallesinella, to then return to Madonna di Campiglio.

W Dolomites of Fassa we suggest trekking From Catinaccio to Sassolungo, In the footsteps of the pioneers of Dolomite mountaineering. The starting point is the Passo Carezza pass: you need to reach the Paolina hut and then follow a comfortable trail to the Roda di Vaèl hut. About halfway through this crossing, you reach a large bronze eagle commemorating Theodor Christomannos, a pioneer of Dolomite tourism who was the first to describe the route for use by 19th century mountaineers. The trail continues up to the Passo delle Cigolade and through the Alta via dei Fassani until you reach the Vajolet hut, at the foot of the Tre Torri Gorge. The second day is the way up, up to the Passo Principe pass, then through the Molignon and Tires passes, reaching the Alpe di Tires hut. The destination of the hike on the last day is Passo Duron, and from there, staying in the high altitudes, head to the Sassopiatto hut. On the trail named after the king of mountaineers Friederich August of Saxony, at the foot of the Sassolungo group, you reach the Pertini, Friederich August and Des Alpes refuges, and finally the Col Rodella cable car station, which leads to the final section down to Campitello di Fassa. 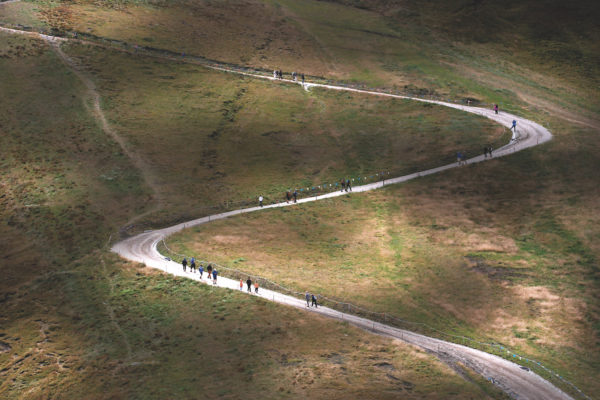 Pale di San Martino – Trekking around Monte Mulaz. This trek allows you to circumnavigate the imposing Monte Mulaz, in the northern sector of the Pale di San Martino, and although not very popular, is one of the most fascinating routes in the Dolomites. The route initially winds through the very green Val Venegia valley, taking in spectacular panoramic views of the vertical walls of Cimòn della Pala, Cima Vezzana, Bureloni and Cima Mulaz, all the way to the pastures of Malga Venegia. Beyond Malaga Venegiota, the forest road ends and the section leading upwards along wide zigzags begins, up to the foot of the imposing Dolomite walls of Campanile di Valgrande and Cima Focobon, on the picturesque Passo di Mulaz pass, at 2610 m. From the pass, you can climb to the summit of Monte Mulaz (2903 m), which is a panoramic balcony overlooking the entire Pale di San Martino above the Val Venegia valley. The path leading up to the summit, however, requires skill, since it includes several exposed sections, so experience in rock walking is also needed; it is therefore a variant reserved for seasoned and well-trained hikers. After a stop at the hostel Volpi di Misurata al Mulaz The hike continues downhill along the 710 trail, taking special care to turn left (towards the north) to the 751 trail leading to the Passo di Focobon pass (2326 m). The trail then crosses the sloping grassy slopes and reaches the nearby “Passo di Venegiota” (2299 m). Here, leave the 751 trail and take the path leading steeply down to the foot of Cima Venegiota. At an altitude of 2210 meters, go straight ahead (towards the valley) or follow the arrow to the left until the junction with road 749. Following the trail to the left, one reaches the bottom of the Val Venegia valley, then returning to the starting point.

Let’s Dolomites – the mountains you don’t know yet

Let’s Dolomites is a project born from the initiative of the Trentino Alpine Guides, prepared for those who want to experience trekking among the main massifs of our region. You can choose from 6- or 3-day packages with accommodation in mountain huts and mountain lodges. Information and reservations at www.campobase.travel

Anniversaries high in the mountains

In the summer of 150 years ago, exploration activity in the Trentino Dolomites was in full swing, and its heroes included British mountaineers, members of the Alpine Club of London. Special mention should be made of mountaineer Francis Fox Tuckett along with guides Christian Lauener (CH) and Santo Siorpaes “Salvador”, as he conquered the Cima Brenta from the north glacier side. And he also became the patron saint of the SAT hut in the high ground of Vallesinella, exactly opposite this peak.

On Catinaccio d’Antermoia in the eastern Dolomites climbed in turn by Charles Comyns Tucker, Thomas Henry Carson and their guide Antonio Bernard from Val di Fassa. Today, this summit can be reached by an easy via ferrata running on the western slope, starting at the Passo Principe pass.

In turn, the summit Cima Vezzana Pale di San Martino was first climbed by Douglas William Freshfield along with Charles Comyns Tucker. This peak, in terms of height second only to Cimòn della Pala, can be climbed by walking from the Travignolo Pass, having previously crossed the Val Cantoni, starting from the Rosetta – Giovanni Pedrotti hut, 10 minutes from the Col Verde – Rosetta cable car station.